This Summer, for about the twentieth time, I decided to become a runner. Running has always felt like torture for me. Just stepping out the door reminds me of those days in Junior High gym class when we were forced to run a mile. Four times around that huge dusty track with the entire class. For me, this was worse than the swimming unit. Forcing twelve year old girls to swim laps with twelve year old boys in the middle of the school day is clearly unkind, but running was worse for me. I was always last, and it felt bad. I never understood why I was so slow and these other girls were running 6 minute miles. It was rough on the self esteem.

Though I never felt confident at it, over the years, I’ve been able to do a little running on my own.  For a month, back in 2006, I did something I called “angry running.” It was related directly to a bad job. Well, a good job that had a lot of bad days. I would get home at 5:00, yeah it did have sweet hours, and my mind would be spinning. All I could do was run through the infuriating moments of the day over and over again, and act out the conversations that would go differently if I had the chance. I had two options, either drink wine until I fell asleep, or find some physical way to act out my rage. So, I took up angry running. I got home from work, changed into tennis shoes, and ran out the door. I then proceeded to run as fast as I could until I was no longer angry. It worked. For a while.

Well a few years later, and on a totally different career path, I took up running again. This Summer it started out slow, but eventually I got into a groove. A few things were different in my life that helped me stick with it. One, I had a bunch of classmates who were into running too. Some are marathoners, and some are novices just like me. Though I rarely ran with them, just knowing they were out there doing it too motivated me. Also Joe, he was getting it to running with me, and we motivated each other. We can’t really run together because of his excessive height. He takes one stride for my two, and watching him try to keep pace with me is like watching someone ride a bike too slow to stay upright. So, I let him run ahead. Oh yeah, and I have a wedding dress to fit into.

So I started with one of those “couch to 5K” programs I found online. Eventually I moved from the treadmill to the outdoors, and that’s where I really started to enjoy it. Like I actually enjoyed it. I decided to sign up for a 5K to keep me motivated. My friend Caitlin ran it with me, and it was awesome. I didn’t win, but it wasn’t too hard and I definitely wasn’t last. 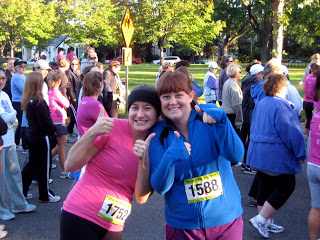 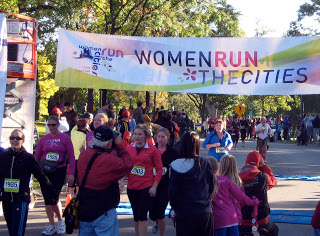 I proceeded to run four more 5Ks in about 2 months. It’s easy, as one can find at least two races to choose from somewhere in Minnesota each weekend, year-round. I found them all at Running in the USA.  Needless to say, I think I am addicted. I don’t know if it’s the t-shirt, or the thrill of running with people who run a 5K in 16 minutes, and with those who run it in 45 minutes. It’s really encouraging to see that many people dedicated to something. For the most recent race, I convinced my family to run with me! We all did the Turkey Day 5K in Minneapolis on Thanksgiving morning. It was 4 degrees. Yes, crazy I know. It really wasn’t that bad once you got going. Now, I figure if I can run in 4 degrees, I can run anytime. Though, it is pretty tough to get me outside these days.

I’m excited for the snow to start melting, as I have a new goal. This year I’ll run a half marathon. It sounds daunting, but I know I can do it. I won’t be first, but I will definitely not be last.

One thought on “So Maybe I’m a Runner”