A year or so ago my Grandmother, who is in her 80s, took her four grown children on a trip to visit our family’s homeland, Klövsjö, Sweden. From the stories they told, it was a once in a lifetime experience for everyone. Most of us don’t continue to travel with our parents and siblings into our adulthood, but their trip was an inspiration for me seek out similar experiences with my family. My Great Grandmother, Anna Linde’s, parents came from Klövsjö, and hopefully I’ll take my Linde there someday to see where it all started.

My Grandmother at the town’s sign, she took an identical picture almost 20 years ago when she visited with my Grandfather

In the years since she and my Grandfather first visited Klövsjö, my Grandmother has kept in touch with relatives and friends that live there. She’s a mad serious letter writer. Like with paper and pens. During this trip they spent a lot of quality time with these folks. Though a real and functioning town, Klövsjö sounded like museum in many ways. The houses and possessions of my Grandmother’s family are still there, over 100 years after they emigrated. The residents of the town have long memories, and they clearly value passing history on to new generations. This is a value I was raised with, and I hope to pass on to Linde as well. 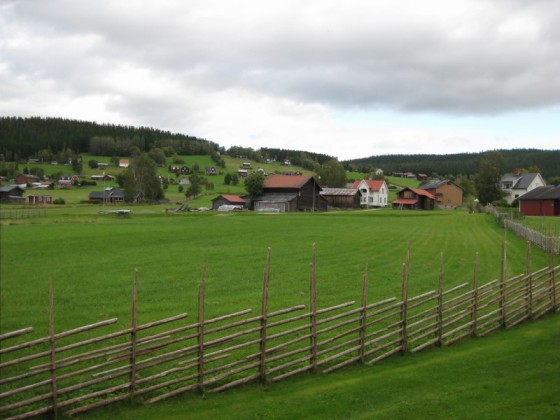 At one luncheon, the Swedes treated my family smorgasbord of traditional and modern Swedish delights. My family eats Swedish food on Christmas, but over the years we’ve learned that many modern Swedes don’t eat those things anymore. Minnesotans, not Swedes, actually produce and eat most of the world’s lutefisk. Only God knows why.

The original inspiration, from the trip to Sweden

Inspired by their photos, I decided to attempt to create one of the more unique dishes they were treated to, the Smorgastorta. OK, so I didn’t actually know what it was called until I Googled it. We had just been calling it the sandwich cake. Because that’s exactly what it is, a sandwich that is a cake. Now, I love both sandwiches and cake, so I was inspired. My Dad’s birthday seemed like the perfect opportunity to make it, as it’s clearly meant to be consumed by a large number of people.

I didn’t get a recipe, I just looked at some pictures and went with my gut. I assembled the guts of the smorgastorta the day before the party. I decided on a three layer cake with three different types of bread. I knew I had to have a rye bread, but the other two where just what looked good at the bakery down the street. I found a sourdough loaf, and a rosemary and olive oil flavored loaf, and sliced each into ½” – 1” slices. I decided to use a couple different types of filling for in between the layers. For the first, I mixed cream cheese with lemon zest and dill. For the other, I just used mayo.

I assembled the cake in my Pyrex casserole dish, it was the right shape for the job. I put a sheet of wax paper in the dish first, to make it easier to flip the cake out for decorating. First, I placed a one slice thick layer of the sourdough bread, and covered it with a thin layer of smoked salmon, followed by a healthy layer of the cream cheese concoction. Next, I laid the slices of rye, put a thin layer of mayo over that, and then a layer of thinly sliced cucumber and red onion. I finished with the rosemary bread on top. I wrapped the whole entire dish with plastic wrap and stuck in the fridge for the night. In order to compress the cake a little, I put another pyrex on top of it, and put a gallon of milk and a couple of beers in it. This way you kill two birds with one stone, compress the cake, and make room in the fridge. Now’s a good time to mention that I had a ton of leftover bread. 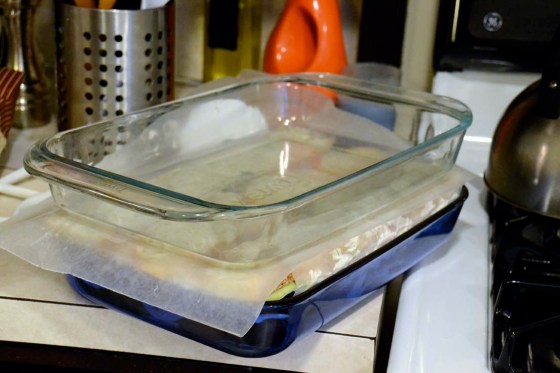 About an hour before the party I decorated the smorgastorta. I turned it out onto my serving dish. It really compressed well, and had the make up of a regular sweet cake! For the outer frosting, I made a savory whipped cream with lemon zest. I generously frosted the outside of the cake, just like a birthday cake. Just to save time, I prepared all of my adornments earlier by slicing them thinly. It really helps to have a mandolin. I chose things that I like to eat, and things that would be colorful. You can use anything you want, whatever you like to eat. I hate olives, so I didn’t use olives.

My decorating strategy was simple – make it look pretty.

Obviously, I couldn’t taste it before I served it to the party, so I was really nervous about how it would turn out. I was worried it might be soggy, or not have enough flavor. It was remarkably good. The breads absorbed the flavor of the fillings, but they didn’t get soggy at all. There was a great mix of salty, tangy, herby, and a little bit of sweet.

The family loved it, and my Dad and Aunt and Uncle were excited to relive a little bit of their trip to the motherland. I’m thinking this will be my new contribution to the family food tradition.

My sister Natalie created this awesome cake for the party

Do you have a signature contribution to your family’s food tradition? Have any new foods been added to the tradition in recent years?

One thought on “The Smorgastorta, A Little Bit of the Motherland”