As I tap this slowly out on my phone you are snoozing on my chest. It’s been a while since we’ve done this. It’s been ten weeks and four and a half days since you moved into this world. It … END_OF_DOCUMENT_TOKEN_TO_BE_REPLACED

Luang Prabang, Laos is a magical place. Young monks clad in orange robes saunter along the misty sidwalks, while visitors on bikes amble the streets in search of which wat they’ll tour next.  Though it is touristy and backpackery, it … END_OF_DOCUMENT_TOKEN_TO_BE_REPLACED

I just had the most amazing moment sitting here on the mahogany room couch. Linde’s asleep in her crib, J is out to dinner for work. For a second, I forgot I had a daughter. It was fleeting, but for … END_OF_DOCUMENT_TOKEN_TO_BE_REPLACED

Dear pumpkin, That’s the name your Dad and I gave you last week. I think it’s pretty adorable. Apparently you are the size of a rasperry today. I seem to realize your existence as your “fruit” gains in size. I … END_OF_DOCUMENT_TOKEN_TO_BE_REPLACED

You are here, you’re our daughter, and you entered the world very dramatically. We took you home from the hospital on May 23rd. I dressed you in your navy blue outfit with the tiny white elephants, and we drove home … END_OF_DOCUMENT_TOKEN_TO_BE_REPLACED

So in Minnesota we have cabins. In some places they are called lake homes, and summer houses in others. I’ve been going to them as long as I can remember, but we never had one we could call our own. Though some of my favorite memories are of summer nights playing Hearts at the cabin on the lake, this was always cabins rented for one week each summer. We could leave our personal stamp, or even leave behind a bag of marshmallows for ‘smores at our next visit. 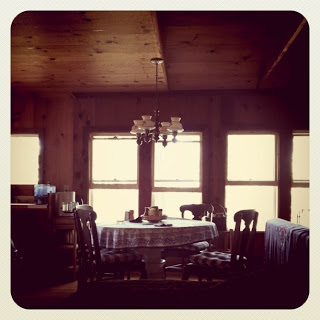 This Summer that all changed with my parents purchase of our very own cabin. It’s on Leech Lake (yes, it’s actually full of leeches, we’re slowly overcoming the fear), close to many of the rented cabins, and it oozes with a sense of timeless lakeside bliss. My Mother is so happy about the place I think she might explode. I know she’s wanted this for many years, and you can see the joy in her eyes every time she speaks of it. 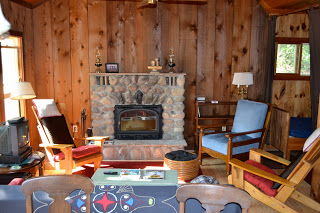 It doesn’t have running water, and the loo is an outhouse, but I love it there. It’s quiet, it’s beautiful. It doesn’t have WiFi (or 3G), but it’s grounding. It’s the only placed I’ve slowed down enough to read more than a page of a book in at least a year. It’s a place where my sisters and I were brought together in a way we haven’t been in years. It’s where Joe and I celebrated our Mini-Moon after our wedding last month. 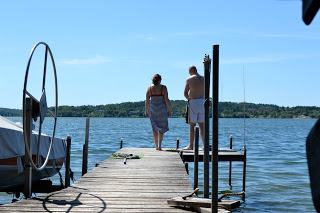 The lake is overwhelmingly georgeous. It sparkles. Bald eagles regularly swoop overhead, and the sound of the loons is indescribable other than it sounds like Minnesota. The sunsets are stunning, every night. 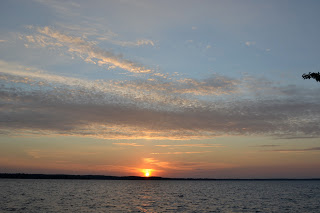 It’s my family’s cabin. We’ll spend summer days there for many years. My kids will call it “the cabin,” and in their eyes it will have existed since the beginning of time. In my mother’s eyes it will exist until the end of time. Hopefully true.

So, I’ve discovered Pinterest, and it’s amazing. The problem is it’s so amazing it’s difficult to tear one’s self away from the site long enough to actually create any of the fun crafts, foods, or home decorations that are so inspiring.  Well this evening I finally did, and I think it turned out beautiful enough to blog! Behold: 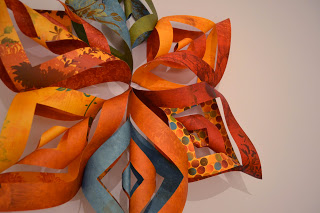 The instructions can be found here on a lovely little blog. It was really simple, and since I’m not a scrap booker, it’s nice to have a reason to buy all those pretty papers they use. I think I’ll make one for each season. Only problem is where to store them in our 775 square foot apartment during the off season. Sounds like a good reason to buy a house to me. 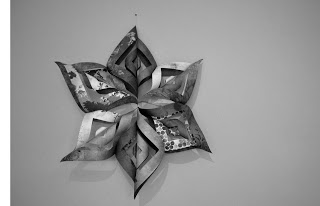 I always thought I was a grateful person, but in the last two weeks I understood it on a whole new level. Tonight I completed my first two weeks as an oncology nurse. It’s been exhausting, gratifying, concerning, and tough, but it’s been good. It’s not all oncology, only about half the patients have cancer. The other half are a mixed bag of medical problems, often heart disease, COPD, diabetes, etc.

But the cancer patients, wow, the cancer patients. They are young, some close to my age. They were healthy. Runners, bikers, vegetarians, new moms. Last week, a month ago, 6 months ago, 5 years ago they found out they have cancer. Some don’t even know yet. They have cancer. I know, but it’s not my role to tell them. What do you do with that? What do I do with that… at the hospital, at home?

They come to me, some with their first or second round of chemo, some on their last with their livers’ and kidneys’ and hearts’ wrecked from the fight. I see them for a few hours, maybe a couple of days, of what will be the battle of their lifetime, their new identity, their new story, their last story, their survival story. There is no way to know right now which it will be.

Selfishly I wonder, where do I fit in this story. Will my passing through their journey be positive, helpful, encouraging, comforting, truthful? I guess this is my challenge.

I had a great 2 hour phone conversation the other night with a friend that is so special to me. Though our conversations are increasingly rarer, and we unfortunately rely too heavily on the FB for our life updates, I will forever consider her one of my best friends. 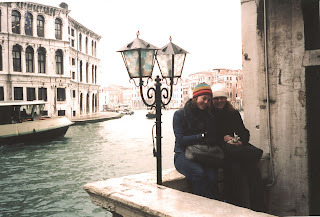 It all started in September 2001. Though this month lives on in the memories of many for one reason,  but I am lucky to have a thousand more positive associations with it than the one negative. It was at the Hotel du Monde in Paris’ 11th arrondissement on September 13th or 14th. I can’t remember exactly. I had just arrived for my semester abroad from a week with friends in Germany.  9/11 just happened, but with the exception of CNN World on TV in the background, I was incredibly distanced from the situation. I arrived late, and missed our first group meeting. I made my way to our apartments to find my new classmates absent, out exploring the city. I settled in, and laid on the bed staring at the ceiling. I looked at the bed next to mine, and hoped for a roommate I could at least get along with.  I contemplated the experience that lay before me, so unaware of how good it would actually be.

Hours later, she arrived. While much of this is lost to a blur of jet lag and kir, I know two things. We stayed up nearly the entire night talking like twelve-year-olds who just discovered the telephone, and we never looked back. Though I was unaware of it until a few weeks later, there was one minor deal breaking moment. I let it slip that I was in a sorority, and Regan said she second guessed our entire brief friendship at that moment, but being the person she is, she kept an open mind.

Six weeks in Paris and Six weeks in Florence passed in what was simultaneously a moment and a lifetime. We traveled back to Kansas to construct what is the very complicated post study abroad existence.  Regan, myself, and the rest of the Dirty 7 +Spikes (another story for another day) melded our new relationships with the old, and formed some pretty solid friendships. 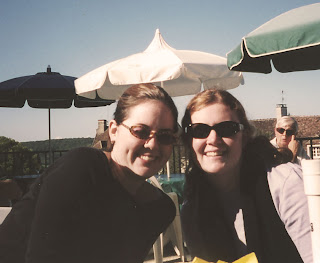 We laughed, man, did we laugh. We cried, we planned. We partied, sometimes a lot. We had outrageous adventures. One time we tried to take a tour of Leavenworth Federal Penitentiary. Yeah, it’s a working federal penitentiary, they don’t give tours. 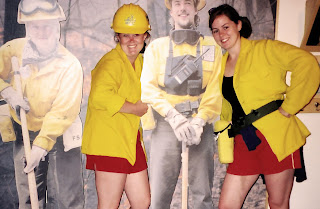 Six years ago, I moved back to Minnesota. Leaving Regan broke my heart. I knew things would never be the same. They aren’t, but that’s okay. Every time we talk I am amazed at the similarities in our lives, and our outlooks. We’ve arrived at such similar spiritual conclusions. We’ve used the powers of attraction, visualization, and positivity to create amazing lives for ourselves. Every time I talk with her, I’m floored by the things she is doing, living her wildest dreams.

She inspires me. She challenges me to be more positive, more understanding, more patient, more grateful. She introduced me to The Four Agreements, a book that changed and continues to change my life. A couple of years before she got married, I was telling her how inspiring I thought her relationship was, how they just worked so well together. She gave me the best relationship advice I’ve received to date, and I try to remind myself of it every day. “Just be nice to each other, and don’t say mean things to each other,” she said.

I feel so for that time in Paris, where we built a relationship that will last a lifetime. I hope everyone is lucky enough to have a Regan. 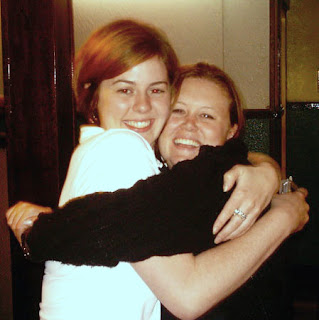 So, it’s about that time of year when we start talking about the Fair, right? I mean the Minnesota State Fair. It’s still snowing, and there is no end in sight. I thought I’d try to lift my, and others’ spirits with memories of the Fair. It’s traditionally the sign that we are nearing the end of the glorious Minnesota Summer. White wines on patios, relaxing weekend camping trips, sleeping with the windows open, and hikes through the State Parks are winding down. We need to mentally prepare ourselves for the long bitter Winter. We accomplish this by stuffing our faces with fried food on sticks, listening to washed up 80’s bands, and admiring livestock as if we actually hold some interest in the variations of Minnesota Swine.

So for the sake of my sanity, which this Winter is slowly eroding, I give you a photo homage to the Fair…. 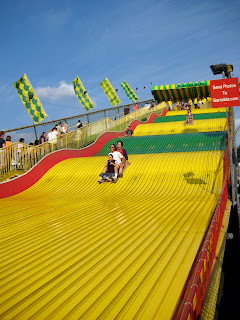 The Giant Slide. I was terrified of it as a kid, but it’s quite enjoyable as an adult. 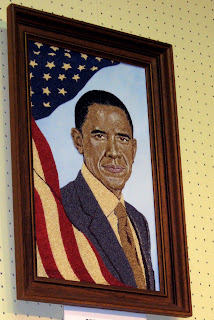 A tribute to our wonderful president, constructed entirely with seeds. 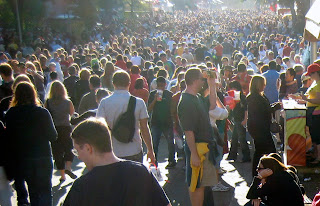 We went on the busiest day this year.  It was a record, 234,384 people attended the fair that day. 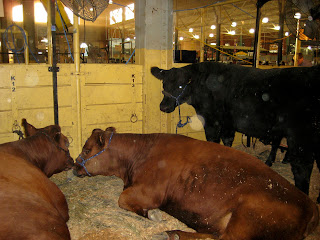 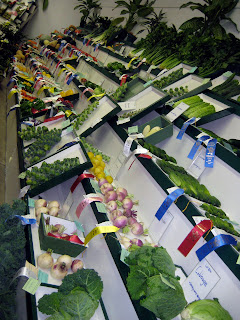 Our state’s vegetable bounty. None of which we would eat that day. 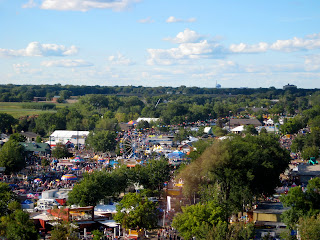 View of the Midway from the Space Tower. 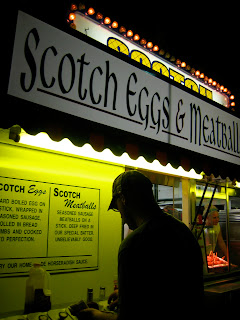 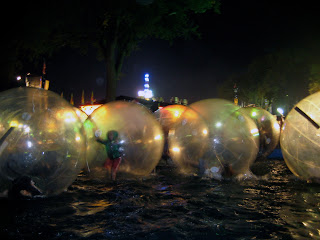 A new addition to the fair, and yes, adults can do it too. I’m totally in next year. 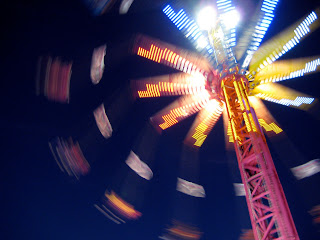